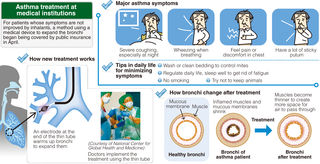 By Kiyohiko Yoneyama / Yomiuri Shimbun Staff WriterAsthma causes coughing and difficulty breathing. The predominant method of treating asthma is having patients use inhalers that expand the bronchial tubes, but this year in April, a method using a medical device to expand the bronchial tubes came to be covered by public insurance. It is hoped that this treatment, intended for patients with severe symptoms, can reduce the frequency of attacks.

Asthma can cause pain and wheezing noises when breathing, as well as severe coughing. Some people can also cough up sticky phlegm or feel pain in their chest. There are an estimated 6.9 million sufferers in Japan, and in some cases, if the condition worsens, it can prevent patients from breathing and cause death.

Bronchial tubes are hollow air passages throughout the lungs. As asthma patients experience inflammation inside the tubes, the walls of the tubes swell, constricting the hollow space available for air to pass through. Dust or other irritants can cause the passages to become even narrower and result in an asthma attack.

Until now, a common treatment is to use steroid inhalers that suppress inflammation and other inhalers that expand the bronchial tubes when symptoms occur. Some inhalers on the market offer both treatments.

The treatment is limited to patients with severe symptoms who are 18 or older and for whom other treatments have been ineffective. The treatment is administered on three occasions separated by intervals of at least three weeks, one time each for the lower right lung, the lower left lung, and the upper parts of both lungs. On each occasion, the device is used to warm up 40 to 70 locations, taking about an hour.

This treatment has just been introduced in Japan. It does not completely cure asthma, so patients must continue to take medicine even after receiving this treatment.

“In the future, I would like to verify whether patients could actually stop taking medicine after treatment,” said Yuji Toda, professor in the Department of Respiratory Medicine and Allergology at Kinki University’s Faculty of Medicine in Osaka Prefecture.

“One condition to use this medial device is that patients are only allowed to undergo this treatment once in their lives. The timing of the treatment should be determined in consultation with a doctor,” said Haruhito Sugiyama, chief director of the Department of Respiratory Medicine at the National Center for Global Health and Medicine in Tokyo. During the treatment, because a tube is inserted into the bronchial tubes, space through which air can flow becomes restricted. For this reason, patients with particularly low lung function may not be able to receive the treatment.

For hospitals to provide this treatment, doctors with vast knowledge and experience with asthma need to be trained by the device’s manufacturer.

While treatment of asthma is evolving, it remains essential to prevent attacks and the worsening of the condition. Carefully cleaning the house is important to avoid asthma triggers such as dust, dust mites, mold and animal hairs.